Many people still believe that jobs in the IT industry are meant for men. “After all, guys have the ability to think analytically. Women are driven by emotions, they don’t have talent for working with numbers. Besides, is a girl who is interested in computers a real female?” This type of stereotypes have been repeated in our society for decades, at the same time increasing the gender gap in the IT industry. Fortunately, there are more and more changes visible in this matter, and women prove that gender has nothing to do with their expertise in a given field. What is the situation in the employment of women in the IT industry in the world and in Poland? What will it look like in the future and how to support women in IT? We publish the following article on Women’s Day because it provides answers to these questions. We wish our female clients, candidates, recruiters and readers all the best and further success in their professional career development!😊

Globally, women make up 35% of STEM (Science, Technology, Engineering, Mathematics) students and 29.3% of those working in scientific research and development (R&D). According to data collected by Adeva, women hold 25% of all the jobs in the tech industry. Despite the fact that there are a few well-recognised women in top positions, such as Sheryl Sandberg –  Facebook COO  or Susan Wojcicki – YouTube CEO, at the Executive level females make up 21% of the overall workforce. It is also visible that Top Tech companies struggle to balance the gender gap – there were just 7% female participants in Stack Overflow Developers survey, only 6% of user profiles on GitHub are women and only 18% of women employees in Google hold technical roles.

Has the situation changed throughout the years? The gender gap in technology and data science has grown significantly over the last three decades, raising global concern about the state of open-mindedness of the information and tech industry. Computing occupations held by women have been declining since 1991, and from then to 2018 it dropped by 11%.

Moreover, the study from 2020, led by Accenture and Girls who Code, showed that 50% of women abandon technology careers by the age of 35 and that females leave tech roles at a 45% higher rate than men. Only 21% of women in the study said they believed the technology industry was a place they could thrive in.

Based on the interviews with 500 participants worldwide, some of the primary reasons why women are underrepresented in technology are the lack of mentors (48%), the lack of female role models in the field (42%), gender bias in the workplace (39%), unequal growth opportunities compared to men (36%) and the unequal pay for the same skills (35%). These points clearly show the directions for making the improvement in the industry.

According to data collected by NoFluffJobs – a Polish job board dedicated for IT positions, it is estimated that in Poland, women constitute approx. 30% of IT specialists. The most popular programming languages that they use are Java, JavaScript, Python and SQL. Based on the report published in 2021, 22% of Polish women currently active in the industry gained knowledge during the self-study process. In turn, 12% of the respondents had previously completed IT courses and 28% of women indicated that they graduated from IT-related studies.

The report by Geek Girls Carrots, an organization focused on attracting women to the tech industry, states that in an average Polish IT team, there are 10 men per 3 women. In practice, it very often means that there is only one woman in the team – it is a common experience of many employees of the IT sector. 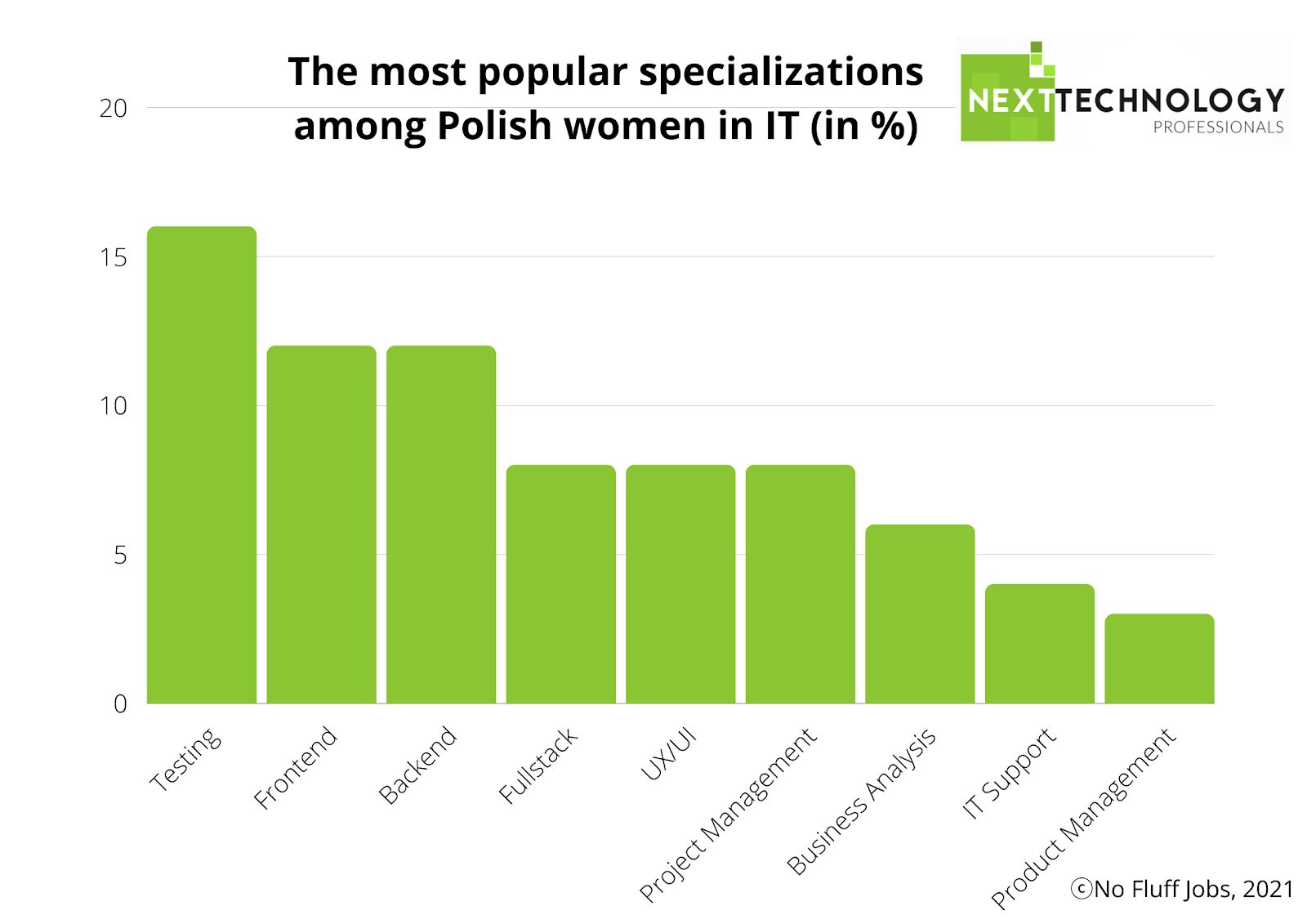 Future of women in IT

Women are still underrepresented in the industry, and there is still a lot of inequality against them. Will that change in the future? Based on the current rate of progress some people estimate that it will take until 2133 to close the gender gap entirely. It is expected that 1.6 million young women would work in the tech industry in 2030.

ISE (ICT Solutions & Education) suggests some steps that can be taken to remedy this, including:

It’s promising that many companies notice the benefits of gender diversity in the workplace, and the tech industry is no different. From the employer’s perspective, some of the most visible advantages are a wider talent pool, multiplicity of perspectives, improved recruitment and reputation (research by PwC showed that 85% female millenials say it’s important to them to have an employer with a strong record on diversity) and greater profitability (according to McKinsey, the most gender-diverse companies are 21% more likely to experience above-average profitability).

Data scientist, Claudia Perlich, made a comment that the ratio of women to men shouldn’t be an issue in the tech industry. Instead, she says that women being recognized for the work they do without gender getting in the way is the challenge:

“I want to come to work and do what I love and be recognized for what I bring to the table and not waste even one thought on the fact that I am female.”

Women remain the minority in technology and data science, but it’s not a solution to forcefully convince them to enter the industry. Rather, it should be a movement to bring awareness to the current situation, highlight the growth opportunities available, and bring the benefits of gender diversity to light. Having the support and being recognized for what women bring to the technological table should continue to close the gender gap at a slow, but steady pace.

How to support each other?

It is important to support women and encourage them to join the IT industry. The few digital communities and people listed below can be a great source of information and inspiration.

#Mamo pracuj w IT –  Polish community of working women who aim to transform the IT industry into a more inclusive workplace.

Women in Technology Poland – a community of women from the IT industry who share information, events, interesting articles and support each in professional development.

WIT Global – Women In Technology – “Women In Tech’s mission is to inspire talented women to consider a future in media and technology by providing the network and experience of successful women and men from the corporate and entrepreneurial worlds.”

SheCodes – an organization that provides coding workshops with the aim of bridging the gender gap in the tech programming industry.

Women in Technology – a non-profit community of universities, companies, nonprofits and government organizations working to increase women’s participation in computing and technology.

Girls Who Code – an organization that encourages girls all over the world that aims to close the gender gap in technology and to change the image of what a programmer looks like and does.

Women Who Tech – a nonprofit organization building a culture and inclusive economy to accelerate women tech entrepreneurs and close the funding gap.

Reshma Saujani – CEO of Girls Who Code, the nonprofit organization working to close the gender gap in technology while teaching girls confidence and bravery through coding.

Pamela Maynard – CEO of Avanade, the leading digital innovator on the Microsoft ecosystem and global leader in technology business solutions.

Magda Zawora – Data Analyst and Data Specialist. Member of the Board at the Women in Technology Poland Association.

Ela Madej – Entrepreneur and investor. Co-founder and Partner at Fifty Years – a fund for supporting entrepreneurs.